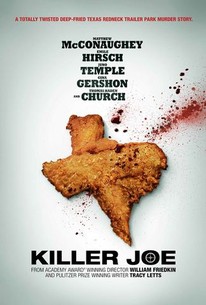 Violent, darkly comic, and full of strong performances, Killer Joe proves William Friedkin hasn't lost his touch, even if the plot may be too lurid for some.

When 22 year-old drug dealer Chris (Hirsch) has his stash of drugs stolen from him by his mother, he has to come up with six-thousand dollars quick, or he's dead. Desperate, he goes to the trailer-park to see his father, Ansel (Hayden Church), and he lays out the plan. Chris's mother, who everyone hates, has a life insurance policy that would clear up his debt and make them all rich. The problem is that Chris' mother is very much alive. Enter Detective "Killer" Joe Cooper, a hired hit man with the manners of a Southern gentleman, who will do the job - for an upfront fee, that Chris and Ansel can't pay. Just as Joe is about to leave, he spots Dottie (Temple), Chris' innocent younger sister. Joe makes Chris an offer, he'll keep Dottie as sexual collateral until the money is collected and his fee can be paid. -- (C) Voltage Pictures

Charley Vance
as Preacher
View All

Matthew McConaughey’s 10 Best Movies
Critics Consensus: The Watch Falls Down On the Job
View All