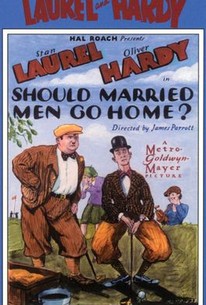 Up until this two-reeler, Laurel and Hardy's films for Hal Roach were released under the "All-Star Comedy" label; Should Married Men Go Home is the start of the duo's own series, showing the faith Roach had in their future. The film opens up on a peaceful day for Ollie and his wife (Kay Deslys). The calm is broken by the arrival of Stan, who manages to visit even though the couple at first pretends not to be home. Stan wants to play golf; Ollie wants to stay home. Stan, however, causes so much unintentional mayhem that Mrs. Hardy finally tells them both to go. The golf course, it turns out, allows only foursomes, but Stan and Ollie solve this dilemma by pairing up with Edna Marian and Viola Richard. After taking the girls for a soda, they hit the course, with Stan, as is his wont, making a total mess of things. He befuddles another golfer (Edgar Kennedy) and finally the guy's ball lands in a puddle of mud. A mud fight involving a large number of people ensues. Eventually Edgar Kennedy finds his ball. The premise for this short was Oliver Hardy's real-life love of golf. No need to look "closely" for John Aasen during the mud fight -- the 8'-9" actor who co-starred with Harold Lloyd in Why Worry certainly stands out!

There are no critic reviews yet for Should Married Men Go Home?. Keep checking Rotten Tomatoes for updates!

There are no featured audience reviews for Should Married Men Go Home? at this time.