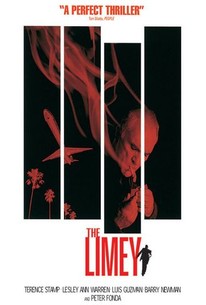 Crafted with eccentric moodiness and style by Steven Soderbergh, The Limey is also a gritty neo-noir showcase for the talent of leading man Terence Stamp.

Two actors best known for their work in the late 1960s, Terence Stamp and Peter Fonda, star in The Limey, a drama in which a recently released felon contemplates the gulf between aging criminals like himself and their modern counterparts. Wilson (Stamp) is a British career criminal who has been released after nine years in prison. He has learned that his daughter Jenny died under suspicious circumstances in Los Angeles, so he travels to America for the first time to find out what happened and who's responsible. With the help of an ex-con named Ed (Luis Guzman), Wilson discovers Jenny was romantically involved with Valentine (Fonda), a middle-aged record producer with a shady past and a fondness for young women. In hopes of getting the truth -- and getting to Valentine -- Wilson finds himself doing battle with some of the worst criminals to crawl from the underbelly of Los Angeles; along the way, he also meets Elaine (Lesley Ann Warren), an older actress who knew Jenny and reminds Wilson of how little he really did for his daughter while she was alive. Steven Soderbergh's first film after his commercial comeback with 1998's Out Of Sight, The Limey features, along with Stamp and Fonda, two other notable 60's actors in supporting roles, Barry Newman and Joe Dallesandro. ~ Mark Deming, Rovi

Nancy Lenehan
as Lady on Plane

Mark Gerschwin
as Party Guy No. 2

News & Interviews for The Limey

Critic Reviews for The Limey

Audience Reviews for The Limey