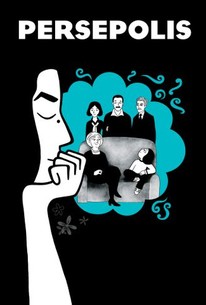 Persepolis is an emotionally powerful, dramatically enthralling autobiographical gem, and the film's simple black-and-white images are effective and bold.

Marjane is precocious and outspoken young Iranian girl who was nine years old during the Islamic Revolution when the fundamentalists first take power--forcing the veil on women and imprisoning thousands. She cleverly outsmarts the "social guardians" and discovers punk, ABBA and Iron Maiden, while living with the terror of government persecution and the Iran/Iraq war. Then Marjane's journey moves on to Austria where, as a teenager, her parents send her to school in fear for her safety and, she has to combat being equated with the religious fundamentalism and extremism she fled her country to escape. Marjane eventually gains acceptance in Europe, but finds herself alone and horribly homesick, and returns to Iran to be with her family, although it means putting on the veil and living in a tyrannical society. After a difficult period of adjustment, she enters art school and marries, continuing to speak out against the hypocrisy she witnesses. At age 24, she realizes that while she is deeply Iranian, she cannot live in Iran. She then makes the heartbreaking decision to leave her homeland for France, optimistic about her future, shaped indelibly by her past.

Chiara Mastroianni
as Marjane as Teenager and Adult

Comic Book Movies You Can Watch Online
RT on DVD: A Killer Sopranos Set; WALL-E Gets a Friend
UK Box Office Breakdown: Summer Season Begins With a Bang
View All