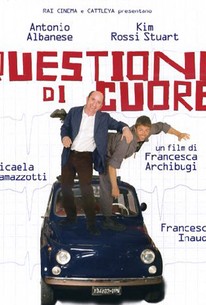 Two men with virtually nothing in common strike up the closest of friendships but must deal with the impending shadow of mortality, in this gentle comedy-drama from cause-célèbre Italian director Francesca Archibugi. Successful screenwriter Alberto (Antonio Albanese) checks himself into the hospital complaining of chest pains; meanwhile, affluent garage owner Angelo (Kim Rossi Stuart suffers from a massive heart attack and winds up in the same room next to Alberto, where he makes a series of courageous but unsuccessful attempts to rebound and feels his condition deteriorating. In-between Alberto's visitations from various movie industry friends (established via a series of cameos) and Angelo's chats with pregnant wife Rossana (Micaela Ramazzotti), the patients become acquainted, and before long they mutually regress to goofy, teenage behavior and begin swapping confidences. Angelo develops a deep-seated level of respect and admiration for Alberto - enough that he begins to perceive the writer as someone who can provide for Rosanna and the kids after his own death - and Alberto, who has seldom been close to anyone, develops a real sense of what friendship means for the first time in his life.

Paolo Villaggio
as Renato
View All

There are no critic reviews yet for Questione di cuore. Keep checking Rotten Tomatoes for updates!

There are no featured audience reviews for Questione di cuore at this time.