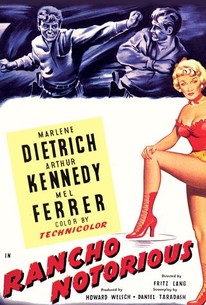 The original title for Rancho Notorious was Chuck-a-Luck, which is also the title of the soundtrack ballad (written by Ken Darby) which unifies the plotline, à la High Noon. Frontiersman Vern Haskell (Arthur Kennedy) wanders throughout the West in search of the man who robbed and murdered his fiancée. He is told that he'll probably find the culprits at Chuck-a-Luck, a combination horse ranch and criminal hideout overseen by saloon chanteuse Altar Keane (Marlene Dietrich). To gain entrance to Chuck-a-Luck, Haskell poses as an escaped prisoner. Keane warns him that the ranch has only one rule: "Don't ask questions." Still, he has ways of finding things out. Haskell is compelled to keep up his charade when the dirty denizens of Chuck-a-Luck plan a big bank holdup, but this has the result of exposing the killer of his girl. Director Fritz Lang had a rough time with RKO head Howard R. Hughes, who insisted upon making changes in the film that might have hurt it irreparably. The biggest argument centered over the title; Hughes complained that no one overseas would understand the meaning of Chuck-a-Luck, whereupon Lang riposted sarcastically that "I'm sure that everyone will understand Rancho Notorious." One of the principal villains was Lloyd Gough, but you'd never know it from the opening titles; Hughes, incensed that Gough had refused to testify at the HUAC "witch hunt," ordered that the blacklisted Gough's name be removed from the credits.

I. Stanford Jolley
as Deputy Warren

Charlita
as Mexican girl in bar