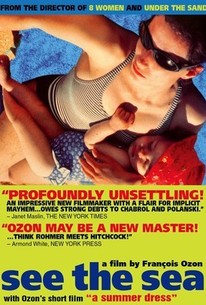 This French suspense drama, set on an island off the Atlantic coast of France, is a medium-length feature, running 52 minutes. Isolated at a cottage on the Ile d'Yeu, young Englishwoman Sasha (Sasha Hails) is alone with her baby daughter when sullen backpacker Tatiana (Marina de Van) turns up. Sasha allows Tatiana to pitch her tent near the cottage and later invites her to dinner. Sasha is fascinated yet wary, since Tatiana's edginess not only generates a sinister sexual tension, it seems to mask a deeper hostility, hinting at potential violence. The escalating threat leads to a stunning surprise for Sasha's husband (Paul Raoux) when he returns to Paris. The film was paired in theaters and on video release with Ozon's Une robe d'été/A Summer Dress, a light-hearted 15-minute drama in which an 18-year-old gay man, on vacation with a boyfriend, has a brief sexual interlude in the woods off the beach with a young woman, who lends him her dress when his clothes are stolen. He rides home from the beach on his bicycle, wearing the dress, and has sex with his boyfriend, whom he had snapped at earlier. The movie captures the lightness and breeziness of summer, of the seaside, of being young, good-looking, and sexually adventurous. ~ Bhob Stewart, Rovi

Critic Reviews for See the Sea

Audience Reviews for See the Sea