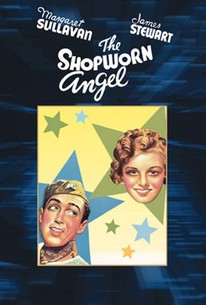 The second motion picture version of a Saturday Evening Post story by Dana Burnet, this romantic melodrama was also the second pairing of actors James Stewart and Margaret Sullavan. Stewart plays Private Bill Pettigrew, a nave young Texan in New York for basic training prior to being shipped overseas to fight in WWI. When he is nearly run over by an automobile, he meets its owner, Daisy Heath (Sullavan). A sophisticated entertainer, Daisy is taken with Bill's sweet, uncomplicated nature, and she agrees to a ruse when Bill asks her to pose has his girl in order to impress his Army bunkmates. Daisy's real boyfriend, Sam Bailey (Walter Pidgeon), is at first amused by Daisy's new friendship, but he soon becomes jealous of Bill's growing affection for Daisy. When Bill receives his orders, he begs Daisy to marry him, and although she doesn't really love him, Daisy can't reject a soldier who may be about to meet his maker, so a quickie ceremony is arranged. When word later comes that Bill has been killed on the front lines, a heartbroken Daisy realizes that she and Sam are taking each other for granted. ~ Karl Williams, Rovi

Hattie McDaniel
as Martha the Maid

Sam Levene
as Guy With Leer

Eleanor Lynn
as Sally the Waitress

Hudson Shotwell
as Jack the Soldier

Charley Grapewin
as Wilson the Caretaker

Grace Hayle
as Mistress of Ceremonies

Dorothy Granger
as Dancer
View All