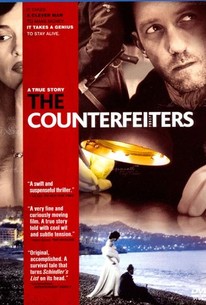 The Counterfeiters is a gripping account of one prisoner's moral dilemma, superbly portrayed by Karl Markovics.

Writer/director Stefan Ruzowitzky explores the moral corrosion of Nazi complicity with this tightly wound adaptation of Adolf Burger's fact-based book The Devil's Workshop. Salomon Sorowitsch (Karl Markovics) may be a talented artist at heart, but his desire for wealth has driven him to use his creativity for more nefarious means. Arrested by the police inspector Herzog (Devid Striesow) at the onset of World War II, Sorowitsch is sent to the notorious Mauthausen concentration camp. It's not long before Salomon's thinly veiled opportunism earns him a relatively comfortable position as the camp's resident sketch artist, and five years later he is mysteriously swept away to Sachsenhausen. Upon arriving at the camp, Sorowitsch discovers that Herzog, now a commandant, is attempting to destabilize the economies of the Allies while simultaneously funding the Nazi war machine by assembling a special team of counterfeit artists to create millions in fraudulent pounds and dollars. As the operation gets under way, Sorowitsch finds the efforts of the team continually undermined by unyieldingly idealistic collotype specialist Adolf Burger (August Diehl). In the months that follow, the team wrestles with their consciences as Axis forces are gradually overwhelmed by Allied might. The Counterfeiters won the Oscar for Best Foreign Language Film. ~ Jason Buchanan, Rovi

Dolores Chaplin
as The Red-Haired Woman

News & Interviews for The Counterfeiters

Critic Reviews for The Counterfeiters

Audience Reviews for The Counterfeiters