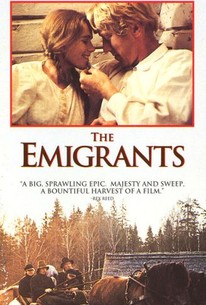 Director/writer Jan Troell's expansive saga deals with the Larsen family, who during the 19th century famine in Sweden emigrate to the more fertile fields of Minnesota. With painstaking detail, the director follows the Larsens as they make the perilous (and, to some of their fellow immigrants, fatal) journey by foot, steamer, train, and paddle boat. The film, which originally ran 190 minutes but was pared down to 150 by its director for American consumption, earned Academy Award nominations for Best Picture, Best Foreign Language Picture, Best Screenplay, Best Direction, and Best Actress (Liv Ullmann). The Emigrants was followed by a sequel, Nybyggarna ("The New Land"); both films have been edited together for TV release under the title The Emigrant Saga. The subsequent American TV series The New Land (1974) starred Bonnie Bedelia in the role created in The Emigrants by Liv Ullmann, and Scott Thomas in the patriarch role originated by Max von Sydow. In 1991, Sven Nykvist directed a "prequel" to The Emigrants titled The Ox. ~ Hal Erickson, Rovi

Halvar Björk
as Anders, Her Son

Yvonne Oppstedt
as Child
View All

News & Interviews for The Emigrants (Utvandrarna)

On DVD This Week: Spectre, Crimson Peak, The Leftovers, and More
View All

Critic Reviews for The Emigrants (Utvandrarna)

Audience Reviews for The Emigrants (Utvandrarna)