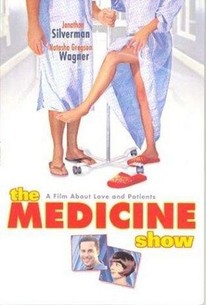 A man faces death and finds love at the same time and place in this emotional comedy-drama. Taylor Darcy (Jonathan Silverman) is a bright but cynical television writer who is emotionally thrown for a loop when his doctor diagnoses him with colon cancer. While Taylor prefers to ignore the bad news at first, in time, he takes the advice of his oncologist and checks himself into the hospital for treatment. Taylor suddenly becomes the recipient of an outpouring of sympathy and good wishes from his friends, which goes against the grain of his dark-humored nature, and he doesn't deal well with the physically and emotionally taxing routine of surgery and radiation therapy. While in the hospital, Taylor meets Lynn Piegi (Natasha Gregson Wagner), a woman who is living with leukemia; Lynn's sarcastic sense of humor in the face of grim news meshes well with Taylor's personality, and he finds himself falling in love with her. But as Taylor advances toward recovery, he has to deal with the fact that Lynn's condition is far more serious than his own, and that she is not likely to survive. The Medicine Show was written and directed by Wendell Morris, who was inspired to make the film after his own bout with cancer.

Norman Parker
as Anthony
View All

Critic Reviews for The Medicine Show

Audience Reviews for The Medicine Show

There are no featured audience reviews for The Medicine Show at this time.