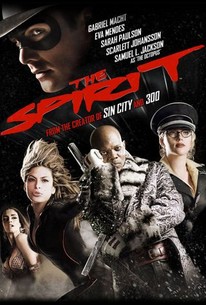 Though its visuals are unique, The Spirit's plot is almost incomprehensible, the dialogue is ludicrously mannered, and the characters are unmemorable.

A resurrected cop does battle with a villain whose quest for immortality threatens an entire metropolis in Sin City creator Frank Miller's adaptation of Will Eisner's acclaimed graphic novel. When a rookie cop is brutally killed and mysteriously brought back to life, he assumes the guise of The Spirit (Gabriel Macht) -- a masked crime fighter who prowls the shadows of Central City on a supernatural mission to keep the urban landscape safe. Upon discovering that his arch nemesis, The Octopus (Samuel L. Jackson), is determined to live forever even if it means wiping out the entire population of Central City, The Spirit must race to stop the diabolical villain from achieving his cold-blooded plan. But even with his unique powers, the brave masked crusader will face a series of deadly challenges as a bevy of treacherous beauties including deceptively sweet girl next door Ellen Dolan (Sarah Paulson), spitfire secretary Silken Floss (Scarlett Johansson), wraithlike siren Lorelei (Jaime King), seductive policewoman Morgenstern (Stana Katic), and French black widow Plaster of Paris (Paz Vega) set out to seduce or consume him at every turn; even The Spirit's one true love, a volatile jewel thief named Sand Saref (Eva Mendes), could ultimately destroy our hero before he accomplishes his mission of saving Central City. ~ Jason Buchanan, Rovi

Samuel L. Jackson
as The Octopus

Paz Vega
as Plaster of Paris

Brian Lucero
as Thug #1
View All

News & Interviews for The Spirit

Critic Reviews for The Spirit

Audience Reviews for The Spirit