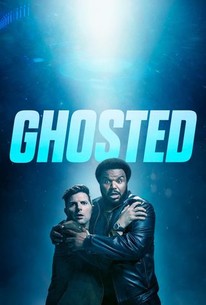 Alberto Carlos
Espinof
There's a problem with the script, which sometimes takes too much emotional, creating a strange mixture. [Full Review in Spanish]
Full Review

Rob Owen
Pittsburgh Post-Gazette
Sort of a comedic X-Files -- but only mildly amusing -- Ghosted needs to be funnier and less predictable if it hopes to win over TV viewers with thousands of options.
Full Review

Scott D. Pierce
Salt Lake Tribune
I like [Adam] Scott and [Craig] Robinson, and the pilot is handsomely produced. But all the humor falls flat - so it's a comedy that's not funny.
Full Review

Margaret Lyons
New York Times
Like other Fox comedies, it's quirky and brash, and decidedly not for young viewers, but it does have an underlying sweetness.
Full Review

Leaf Miranda
The Young Folks
This show feels like a bunch of half ideas that someone thought would work as a show. The characters aren't good and the pacing is way too fast for there to be any real developments.
Full Review | Original Score: 5/10

Glenn Garvin
Reason Online
There are more misses than hits, but in a new season mostly devoid of (intentional) laughs, this is about the best you're gonna do.
Full Review

Kevin Yeoman
Screen Rant
It's a promising new comedy that will hopefully find a way to let its two stars shine.
Full Review

Brandon Katz
Observer
The pilot is a bit messy. Tonally, it's trying to do too much too quickly and most of the jokes don't land. But it's no surprise that the best moments come from Scott and Robinson playing off of one another.
Full Review

Glen Weldon
NPR
There's reason to suspect the formula -- and this show is all formula -- may be off.
Full Review

John Anderson
Wall Street Journal
Fans of Adam Scott and Craig Robinson, among whose ranks I include myself, will be tickled to see them brought together in Ghosted, a show that puts an engaging twist on the odd-couple comedy, namely, the members of this couple know what they're doing.
Full Review

Trent Moore
Paste Magazine
Ghosted looks to dabble just enough in X-Files-style darkness to give it some edge in the increasingly crowded comedy landscape. Stack that against the humor and the talent, and it looks to be a winning formula.
Full Review | Original Score: 7/10

David Wiegand
San Francisco Chronicle
The script is loose, chatty and casual, but it's the chemistry between Scott and Robinson that seals the deal on the comedy.
Full Review | Original Score: 3/4

Sonia Saraiya
Variety
Fans of both comedians -- and fans of spoofs -- will likely find enough to keep them amused with Ghosted.
Full Review
Do you think we mischaracterized a critic's review?
Go back
More trailers