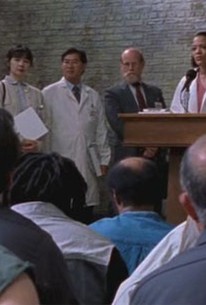 Redding (Anthony Chisholm) denies any involvement in the Chinese refugees death. He lets Morales (David Zayas) know that he won't forget this setup. Alvarez (Kirk Acevedo) tells Glynn (Ernie Hudson) he'll be an informant if he can get out of solitary, and Glynn agrees. But Morales tells Alvarez he has to kill Redding to earn his trust. Dr. Nathan (Lauren Velez) starts testing a new pill on inmates. The drug is designed to rapidly age the body, so that prisoners can serve their time and be released from prison more quickly. Prisoners who volunteer for the testing will have their sentences significantly reduced. Anxious to protect Cyril (Scott William Winters) from Howell (Kristin Rohde), and from being sent to a mental hospital, O'Reily (Dean Winters) convinces Nathan to get them both into the program, over the strong objections of McManus (Terry Kinney). Vayhue (Rick Fox) is up for parole, and Hill (Harold Perrineau Jr.) is determined to make sure he stays in Oz. Tidd (Jacques Smith) can't get close to Said (Eamon Walker), until he protects Arif (Granville Adams) in a staged fight with the Aryans. Robson (R.E. Rodgers) and Hoyt (Evan Seinfeld) tell Cloutier (Luke Perry) to stay away from Schillinger (J.K. Simmons) -- he refuses. Schillinger has his first meeting with Beecher (Lee Tergesen). Glynn agrees to let Busmalis (Tom Mardirosian) have his wedding, as long as he doesn't dig any more tunnels. Busmalis tries to fill in the tunnel he's already dug, hits a water main, and ends up in solitary. Glynn tells Floria (Dena Atlantic) about his marital woes, and gets the volatile Clayton Hughes (Seth Gilliam) transferred to the cop ward in Oz, where John Basil (Lance Reddick) a.k.a. "Mobay," is also being held. Beecher tells Keller(Christopher Meloni) that Barlog (Brian Bloom) plans to testify against him. 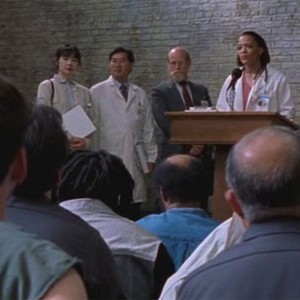