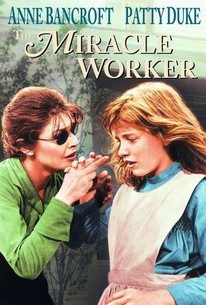 1:45
The Miracle Worker: Official Clip - She Can't See or Hear

2:13
The Miracle Worker: Official Clip - Annie Is Reminded of Her Past

1:41
The Miracle Worker: Official Clip - She Wants to Talk Like You and Me

2:16
The Miracle Worker: Official Clip - It Has a Name

Arthur Penn directed this powerful film version of William Gibson's play about the adolescent Helen Keller, a deaf-mute sealed off from society in her own world, and Annie Sullivan, the teacher who works with Helen to teach her how to communicate with others. Originally presented on television in 1957, the story was transferred to the Broadway stage and became a major success, starring Patty Duke as Helen Keller and Anne Bancroft as Annie Sullivan. Duke and Bancroft re-created their stage roles for this film version, earning them both Academy Awards. Helen Keller is first seen in her Tuscumbia, Alabama home, groping around in her own silent world. Annie Sullivan comes to Tuscumbia to teach Helen to communicate through sign language. Annie immediately sees the main hurdle is to keeping Helen away from her overly loving mother Kate (Inga Swenson) and imperious father (Victor Jory). The parents agree to allow Annie to stay with Helen alone for a few weeks at a small building on Captain Keller's property. Confined together, Annie manages to teach Helen how to dress herself and to recite the alphabet by touch. But Annie hits a stone wall when she tries to get Helen to understand the connection between the alphabet and what the letters represent. The Kellers now take Helen back home and she rapidly slips back into her old patterns. But one night at the dinner table, Helen knocks over the water pitcher and Annie forcibly drags Helen outside to the water pump to refill the pitcher. It is there that a transcendent revelation occurs for Helen.

Peggy Burke
as Helen at Age 7

Mindy Sherwood
as Helen at Age 5

Michael Darden
as Percy at Age 10

Donna Bryan
as Martha at Age 7

Diane Bryan
as Martha at Age 5

Keith Moore
as Percy at Age 6

News & Interviews for The Miracle Worker

The Weekly Ketchup: "Ghostbusters 3" Close To Fruition, Direct-To-Video Sequels Galore, "Ghost Rider" Screening Or Not Screening. Who Knows?
In Other News…Anne Bancroft, Britney Jr. and Michelle Rodriguez
View All

Critic Reviews for The Miracle Worker

Audience Reviews for The Miracle Worker