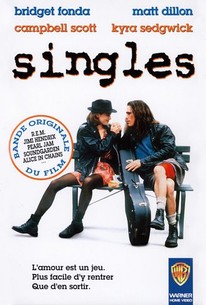 Smart, funny, and engagingly scruffy, Singles is a clear-eyed look at modern romance that doubles as a credible grunge-era time capsule.

Set amidst the burgeoning Seattle alternative music scene of the early '90s, Singles follows a group of twentysomethings as they try to find love and try to come to terms with their passage into adulthood. Arranged as an episodic comedy, the film follows a group of friends who live in the same apartment building and hang out at the same coffee shop. The central couple is Steve Dunne (Campbell Scott) and Linda Powell (Kyra Sedgwick), a pair who meet at an Alice In Chains concert and eventually fall in love. Singles follows the tumultuous relationship between Steve and Linda and their friendship with Janet Livermore (Bridget Fonda), who is trying to win the affection of grunge-rocker Cliff Poncier (Matt Dillon). The film also has a number of cameos, including actors Eric Stoltz, Tom Skerritt, Peter Horton, director Tim Burton and the film's author/director, Cameron Crowe. From the musical side of the fence, Singles features appearances by Sub Pop executive Bruce Pavitt, musicians Chris Cornell (Soundgarden), Pat DiNizio (Smithereens), Tad (Tad), and Pearl Jam's Eddie Vedder, Jeff Ament, and Stone Gossard, who play Dillon's backing band, Citizen Dick.

Xavier McDaniel
as Himself

Wayne Cody
as Himself

Jerome Ehlers
as Himself
View All