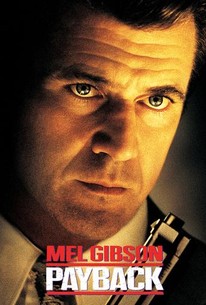 Porter (Mel Gibson) is pulled into a heist by his old friend, Val (Brian De Palma regular, Gregg Henry). As they're stealing $130,000 in laundered drug money from Chinese Triads, no one is going to call the police. Everything goes smoothly until Porter's wife, Lynn (Deborah Kara Unger), shoots Porter in the back. After Val had shown Lynn a photo of Porter in the arms of another girl (Maria Bello), the two planned the double-cross together to pay off Val's mob debts so he could return to "The Syndicate." They didn't plan well enough, though, because five months later Porter's back, a complete sociopath who wants his $70,000. Brian Helgeland, the screenwriter for L.A. Confidential and Conspiracy Theory, makes his directing debut with this adaptation of the novel The Hunter by Donald E. Westlake writing under the pseudonym, Richard Stark. The same novel served as the basis for John Boorman's Point Blank starring Lee Marvin.

Justin Ashforth
as Michael the Bartender

Price Carson
as Bronson Heavy No. 1

Roddy Chiong
as Chow Thug No. 2

Art Cohan
as Bronson's Heavy No. 2

Tom Equin
as Razor Clean No. 1

Brian Heinberg
as Bartender No. 2

Michael Ingram
as Chow's Thug No. 1

Michael Skewes
as Fairfax Bodyguard No. 2

Marc Vann
as Gray
View All