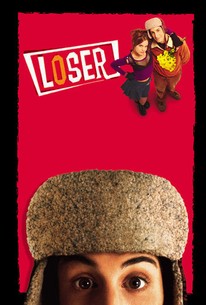 In the grand tradition of teen flicks, Loser comes across as another predictable and underwritten movie with nothing new to offer.

After making Fast Times at Ridgemont High (1982) and Clueless (1995), two of the definitive films about the joys and terrors of American high school, writer/director Amy Heckerling moves on to college with this bittersweet romantic comedy. Paul Tannek (Jason Biggs) is a bright but socially inept college freshman who has just arrived at NYU from the Midwest. Frumpy and studious, Paul has trouble meeting people, doesn't get along with his roommates, and most of his fellow students hardly acknowledge his existence. But Paul finds a soul mate in Dora Diamond (Mena Suvari), who has even more problems than he does: she's out of money, has nowhere to live, works a humiliating job as a waitress at a strip club, and has become involved with one of her professors, Edward Alcott (Greg Kinnear), whose callous treatment hardly boosts her shaky self-esteem. Dora gives Paul some advice on how to fit in with his roommates, and Paul lets her stay with him while she looks for work; when he becomes infatuated with her, he has to figure out how to win her away from Edward. Loser marked a reunion for Jason Biggs and Mena Suvari, who starred together in the hit teen comedy American Pie.

Mike Beaver
as Boy at Concert