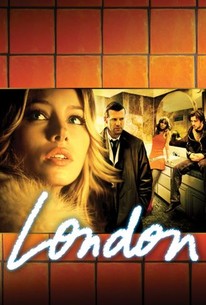 Hampered by pretension and undermined by unlikable characters, London proves that the novelty of seeing actors play against type isn't enough to rescue a deeply flawed film.

A party becomes a metaphor for the wasted lives of a handful of young hipsters in this edgy independent drama. Syd (Chris Evans) awakes from the latest in a long series of drug- and booze-fueled benders when he receiving a phone call from a friend informing him that London (Jessica Biel), who recently broke up with Syd, will be moving away from New York for California with her new boyfriend in a few days, and that a going-away party is being thrown for her that evening. Syd hasn't been invited to the bash, but he decides to attend anyway, and brings along Bateman (Jason Statham), a bartender who moonlights as a cocaine dealer. Bateman is carrying a large supply of nose candy, and after arriving at the party he and Syd install themselves in the bathroom, where they snort line after line while guzzling tequila and discussing philosophical matters regarding love, sex, and emotional pain. The private party-within-a-party is soon joined by Maya (Kelli Garner) and Mallory (Joy Bryant), who share cocaine and sympathy with the guys until Syd learns that London has arrived, and he decides it's time to confront her. London was the first feature film for writer and director Hunter Richards.

Antonio Munoz
as Killer in a Dream

Who Is the Best Chris in the Movies?
Critical Consensus: "Crank" Is Well-Ranked; "Illusionist" Is Magic, "Crossover" Is An Air-Ball, "Wicker Man" Gets Burned
Jessica Biel Joins Nicolas Cage’s "Next" Project
View All