All The King's Men 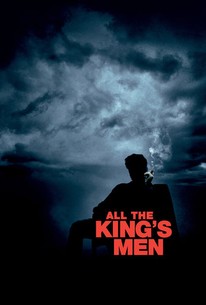 All The King's Men

With a scenery-chewing performance from Sean Penn, an absence of political insight, and an overall lack of narrative cohesiveness, these Men give Oscar bait a bad name.

All The King's Men Photos

The legacy of a populist Southern politician whose lofty ambitions for the future leave him open to corruption and scandal is detailed as author Robert Penn Warren's thinly veiled portrait of Depression-era Louisiana governor Huey Long comes to the screen -- again -- this time courtesy of director and screenwriter Steven Zaillian. Willie Stark (Sean Penn) is a man of the people, and for the people; at least that's what he tells the people. Propelled into a race for governor by opposing forces looking to split the "hick vote," Stark is convinced by a handler -- as well as by young journalist Jack Burden (Jude Law) -- to not kowtow to the powers that be. His rhetoric grows fiery, and he makes his way into office on a not-so-solid foundation of social-service promises. When idealism gives way to the harsh realities of the time, however, the fast-talking politico is quick to discover just how far one can fall when ambition and power lead to a betrayal of one's original motivations. Kate Winslet, Patricia Clarkson, James Gandolfini, Mark Ruffalo, and Anthony Hopkins round out an all-star cast in this second version of Warren's Pulitzer Prize-winning 1947 novel; the first won a parade of Oscars after its release in 1949. ~ Jason Buchanan, Rovi

News & Interviews for All The King's Men

Critic Reviews for All The King's Men

Audience Reviews for All The King's Men

All The King's Men Quotes