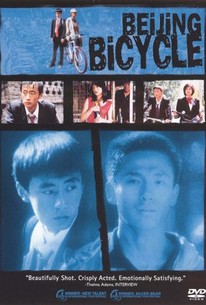 Though rather repetitive in its plot, Beijing Bicycle provides an interesting look at the economic and social changes that have occurred in China.

Following up on his gritty 1998 drama So Close to Paradise, about life among the down and out in Shanghai, acclaimed "sixth generation" filmmaker Wang Xiaoshuai shifts gears with this lighthearted look at bicycles in modern-day Beijing. At the ripe age of 17, Guei (Cui Lin) has left his rural hometown for the big city, looking to strike it rich. Instead, he lands a job as a bicycle messenger, earning paltry pay until he can pay off the bike. Yet he works doggedly without complaint, each day coming closer to the first possession in his planned riches. But just as he is about to pay off the bike, it gets stolen. Guei desperately searches the city and eventually spies a young man named Jian riding it. After the ensuing confrontation, Jian claims that he picked up the bike in a flea market and that it has already become central to his life, as he uses it to impress the girls. Soon, the two develop an unusual compromise. This film was screened at the 2001 Toronto Film Festival.

Li Jian
as Classmate of Jian

Zhang Yang
as Classmate of Jian

Wang Yuzhong
as Classmate of Jian

Zhang Lei
as Classmate of Xiao

Chang Jiayin
as Classmate of Xiao