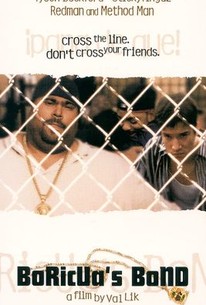 The feature directorial and screenwriting debut of 21-year-old Russian-born, American-bred Val Lik, Boricua's Bond is a harsh portrait of life in one of New York's tougher neighborhoods. Tommy (salsa star Frankie Negron) is a young Puerto Rican painter who is part of a tight circle of friends that include the rowdy Axel (Ramses Ignacio) and Rose (Kaleena Justiniano), a young woman for whom Tommy has obvious affection. His friends are impressed with Tommy's dedication when he sells a canvas for cash to bail his brother Antonio (Jesglar Cabral) out of jail, but they maintain their own dedication to harassing various denizens of their neighborhood. Their latest target is WASP-ish Allen (director Lik), the new kid on the block, who lives with his single mother, Susan (Robyn Karp). Allen stands up to Tommy's friends, leading Tommy to invite him to join their circle, but a neighborhood cop, Highlander (Marco Sorisio), warns Allen to stick to his own kind. Things get ugly after Highlander visits Allen's home and makes a botched come-on to Susan.

Marco Sorisio
as Off. Highlander

Big Punisher
as Himself

Freddie Lopez
as Singer on the Street

Ileana Rodriguez
as Lady in Window

There are no featured audience reviews for Boricua's Bond at this time.