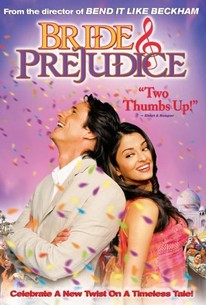 A colorful and energetic adaptation of Austen's classic.

The very British sensibilities of Jane Austen are introduced to the exotic flavors of the Bollywood musical in this romantic comedy with songs from the director of Bend It Like Beckham, Gurinder Chadha. Lalita Bakshi (Aishwarya Rai) is the lovely and eligible daughter of her socially ambitious mother and father (Nadira Babbar and Anupam Kher). Mother and father want to be sure that Lalita, the most beautiful of their four daughters, settles down with a man worthy of her, but she has proven resistant to matchmaking, announcing that she will choose her own husband, and will choose him for love. While mother is keen on the profoundly annoying Kholi (Nitin Chandra Ganatra), Lalita has had her head turned by a handsome vagabond from England, Johnny Wickham (Daniel Gilles). But while attending the wedding of a friend, Lalita meets Will Darcy (Martin Henderson), a college buddy of family friend Raj (Naveen Andrews) who is the son of a wealthy hotel magnate. Lalita finds that Will makes a strong impression on her -- she can't stand him, but she also can't get him out of her mind. Will feels the same way about her, and as they inadvertently chase one another over three continents, will morbid fascination grow into true love? Bride and Prejudice marked the first English-speaking role for Aishwarya Rai, who had firmly established herself as India's leading female star when this film was made. ~ Mark Deming, Rovi

News & Interviews for Bride and Prejudice

Trailer Bulletin: The Sentinel
"Mistress of Spices" for McDermott, Rai
View All

Critic Reviews for Bride and Prejudice

Audience Reviews for Bride and Prejudice