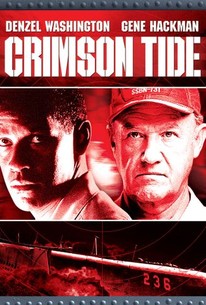 Two leaders with different philosophies about battle and leadership wage war with each other in this tense military thriller. Capt. Frank Ramsey (Gene Hackman) is the commanding officer of a nuclear submarine, the U.S.S. Alabama. Ramsey is a distinguished veteran near the end of his career, and he leads his men with an iron hand; as he puts it, "We're here to preserve democracy, not to practice it." Ramsey is assigned a new second-in-command, Lt. Cmmdr. Ron Hunter (Denzel Washington); Hunter is much younger than Ramsey, Harvard educated, and believes the goal of the military in the nuclear age is to prevent war, not fight it. While at sea, word reaches the Alabama that a splinter group of Russian forces have seized missile silos, and the ship is put on red alert. The Alabama has orders to fire, but as it is receiving a new incoming order the radio malfunctions. It's Ramsey's contention that an order is an order and they are to move forward with the attack, while Hunter feels if there is any question at all about their mission, they should wait until they can receive further instruction, with Hunter going so far as to threaten mutiny against Ramsey if the missile strike is carried out. Quentin Tarantino and Robert Towne both contributed to the screenplay without credit. ~ Mark Deming, Rovi

Jaime Gómez
as Officer of the Deck Mahoney

Ashley Smock
as Guard No. 1

James Lesure
as Guard No. 2

Sean O'Bryan
as Phone Talker No. 1

Victor Togunde
as Sailor With Oba

Bob Stone
as Bob The Magician

Jason Robards
as Rear Admiral Anderson, Board of Inquiry President
View All