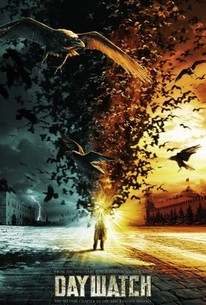 The apocalyptic sci-fi thriller Day Watch (aka Dvevnoy Dozor, 2006) constitutes the second installment in a planned supernatural trilogy by Russian director Timur Bekmambetov. As preceded by 2004's blockbuster Night Watch and followed by Twilight Watch, this sophomore film picks up on the byzantine tale of a world where, centuries ago, the powers of light (representing goodness) and the powers of darkness (representing evil) called a truce. Each side set up a law-enforcement team to guard and monitor the other's activities -- the powers of darkness established and controlled the Day Watch, while the powers of light established and controlled the Night Watch. Day Watch opens in the 14th century, when Tamerlane, a Mongol warrior, acquires an implement called "The Chalk of Destiny," that can be used to guide the course of history. Eons later (in the present day), the Day Watch and the Night Watch are ongoing. Two Warriors of Light, Anton Gorodetsky (Konstantin Khabensky) and his protégé/partner-in-training, Svetlana (Maria Poroshina), quietly develop feelings for one another as they patrol the Night Watch together. As the story progresses, the pair must respond to a distress call from an octogenarian victim of a vampiric attack -- an attack committed (as it turns out) by Anton's 12-year-old son, Yegor (Dima Martynov) -- now a Warrior of Darkness. Anton must suddenly wrestle with two conflicting desires -- the need to protect his offspring by destroying incriminating evidence, and his own desire to remain loyal to the Night Watch. Several additional subplots then unfold concurrently, including that of Yegor learning to practice evil from his mentor, Zavulon (Viktor Verzhbitsky), that of Anton "body swapping" with associate Olga (Galina Tyunina), and that of the relationship between a vampiric child, Kostya (Aleksei Chadov), and his dad (Valery Zolotukhin), who works as a butcher. ~ Nathan Southern, Rovi

Nikolai Olyalin
as The Inquisitor

Igor Lifanov
as The Parrot

Anna Dubrovskaya
as The Vampiress

Sergey Ovchinnikov
as Himself

Anton Stepanenko
as Himself

B. Tarasov
as Gypsies Song Group

Ä. Belov
as Makosh
View All