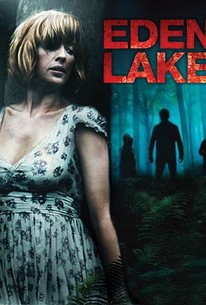 A brutal and effective British hoodie-horror that, despite the clichés, stays on the right side of scary.

A romantic weekend in the woods turns into a bloody struggle for survival when a vacationing couple finds their campsite surrounded by an aggressive gang of obnoxious adolescents in the feature directorial debut of My Little Eye screenwriter James Watkins. All nursery school teacher Jenny and her boyfriend, Steve, wanted was a quiet weekend alone, and what better setting for such a romantic retreat than a quiet lake surrounded by a vast forest? Just as Steve is preparing to propose to Jenny, however, their blissful moment of peace is rudely interrupted when their campsite is encircled by a gang of particularly unruly teens. After the kids provoke the couple by stealing their belongings and vandalizing their car, the situation turns deadly serious as Steve attempts to confront them and suffers a terrible beating. Now it's up to Jenny to flee from her tormentors under the shroud of darkness and make her way to the nearest town, though what she finds there may well be worse than what's waiting for her back in the woods. ~ Jason Buchanan, Rovi