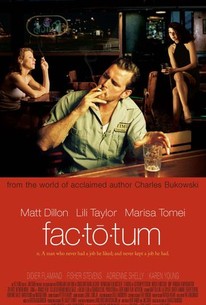 Matt Dillon's performance is the highlight of this somewhat slow but fascinating portrayal of Charles Bukowski's alter-ego.

Norwegian director Bent Hamer follows up his quirky and critically acclaimed Kitchen Stories with a heartbreakingly humorous look at the life of depressive writer Hank Chinaski -- the fictional counterpart of real-life author Charles Bukowski. Adapted from Bukowski's 1975 novel of the same name, Hamer's film follows the perpetually unemployed, alcohol-swilling Chinaski (Matt Dillon) as he drifts through the city streets in search of a job that won't come between him and his first love, writing. Consistently rejected by the only publishing house he respects but driven to continue by the knowledge that he could do better than the authors they continually publish, Chinaski soon begins sleeping with fellow barfly Jan (Lili Taylor), a kindred spirit he meets while drowning his sorrows at a local watering hole. When Hank eventually gets abandoned by the only woman with whom he is able to relate, a brief fling with gold-digging floozy Laura (Marisa Tomei) finds him once again falling into a morose state of perpetual drunkenness and unemployment. ~ Jason Buchanan, Rovi