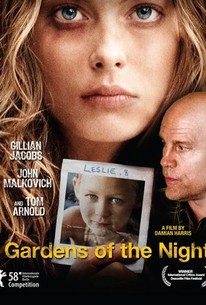 Gardens of the Night

Gardens of the Night Photos

Abducted by two men and forced into child prostitution when she was just eight years old, a homeless San Diego street teen is finally reunited with her family only to find that the traumas of the past may have scarred her for life. Leslie (Ryan Simpkins) was walking to school when her neighbors Alex (Tom Arnold) and Frank (Kevin Zegers) pulled up alongside her and asked for help finding their missing dog. After scouring the neighborhood with the young girl to no avail, the men offer Leslie a ride so she won't be late for school. Along the way, the men tell Leslie that they work for her father. After school, Leslie is surprised to find the two men waiting to drive her home. Claiming that her parents have been called away on urgent business, Alex and Frank coerce Leslie into the car and give her a drink. Later, after dozing off in the backseat, Leslie awakens in a tiny bedroom with eight-year-old Donnie. Like Leslie, Donnie has been drugged and kidnapped. Donnie is led to believe that his parents have sold him for drugs, while Leslie is told that her parents want nothing to do with her anymore. Now, as the two innocent children are forced into prostitution, they use their imaginations to escape into a wondrous world of light where anything is possible.Years later, Leslie and Donnie are struggling to rebuild their lives on the streets of San Diego. Donnie is deeply in love with Leslie, but Leslie's perception of love has been completely destroyed by her harrowing experience. One day, Leslie walks into a children's shelter and begins the painful process of reconnecting with the past. Though she is soon reunited with her parents, everything is different now, and it gradually becomes apparent that any hope she had for a normal life evaporated the fateful day she placed her trust in two monstrous strangers. ~ Jason Buchanan, Rovi

Gillian Jacobs
as Leslie at 17

Evan Ross
as Donnie at 17

Ryan Simpkins
as Leslie at 7

Jeremy Sisto
as Jimmy
View All

Critic Reviews for Gardens of the Night

Audience Reviews for Gardens of the Night

Gardens of the Night Quotes