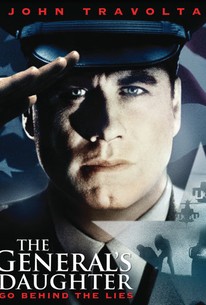 A murder on a military base unearths a netherworld of corruption in this thriller based on the novel by Nelson DeMille. General Joe Campbell (James Cromwell) is a respected military leader with a flawless reputation; he's due to retire from the Army soon and is headed for a Vice-Presidential nomination. However, Campbell finds himself in both a personal and political crisis when his daughter is brutally murdered. Captain Elizabeth Campbell (Leslie Stefanson) was beautiful, intelligent, disciplined, and well-regarded, the very model of an ideal female officer; she was also stationed at the same base as her father. Paul Brenner (John Travolta), a warrant officer of the Army's Criminal Investigation Division, is assigned to look into the case alongside CID officer Sara Sunhill (Madeleine Stowe). Brenner and Sunhill were once romantically involved, complicating an assignment that soon offers more than enough complications of its own. Brenner and Sunhill come to realize that, for all her accomplishments, Elizabeth carried a lifetime of emotional scars from emotional abuse and sexual harassment, and that, despite the General's reputation, his relationship with his daughter was not always a happy or healthy one. It also seems possible that the General's second-in-command, General George Fowler (Clarence Williams III), a likely candidate for the Joint Chiefs of Staff, may also be implicated in the crime. The General's Daughter was the second feature film for director Simon West; his full-length debut was Con Air (1997), after a long string of successful television commercials and music videos.

News & Interviews for The General's Daughter

Sequel-Happy Eddie Murphy Back for "Beverly Hills Cop IV"
Trailer Bulletin: The Hills Have Eyes & When a Stranger Calls
The General’s Daughter takes on a hokey feel with all the overacting, wrong shooting style, and unbelievable plot points.
View All

Critic Reviews for The General's Daughter

Audience Reviews for The General's Daughter