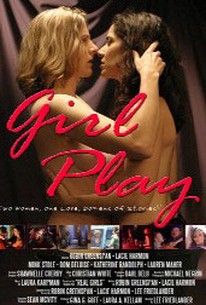 Actresses Robin Greenspan and Lacie Harmon used the ups and downs of their real-life romance as the inspiration for this comedy drama about two performers whose real lives are beginning to mirror their latest roles. Robin (Greenspan) is an actress who has been in a deeply committed relationship with Audrey (Katherine Randolph) for six years, while fellow thespian Lacie (Harmon) is not much on commitment and tends to tire of her lovers once the initial excitement wears off. Robin an Lacie have been cast opposite one another as lesbian lovers in a play directed by the wildly flamboyant Gabriel (Dom DeLuise). While they don't get along well at first, an undeniable chemistry develops between Robin and Lacie, and before long they discover they've fallen in love. However, this doesn't entirely happy news; Robin has to decide if she wants to dump Audrey for Lacie, while Lacie has to choose between the freedom of the single life and her feelings for Robin. Based on the play +Real Girls, Girl Play also features Mink Stole as Robin's mother, who has little understanding of her daughter's sexual orientation.