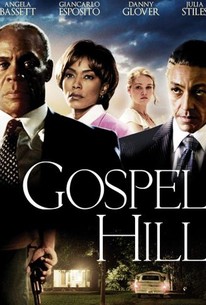 Danny Glover, Angela Bassett, Julia Stiles, and Samuel L. Jackson headline actor-turned-director Giancarlo Esposito's ensemble drama about a small southern town still haunted by a racially motivated murder that occurred there thirty years prior. Civil rights activist Peter Malcolm (Jackson) was at the peak of his popularity when he was ruthlessly gunned down in the streets of Gospel Hill. Thirty years later, no one has ever been accused of the crime, and Peter's brother John (Glover) has withdrawn from the community to ponder the full weight of his brother's unfulfilled mission in solitude. As John sinks ever deeper into a bottomless sea of despair, his wife Sarah (Bassett), an outspoken community activist, campaigns tirelessly against a ruthless band of developers seeking to transform Gospel Hill into a golfer's paradise. Realizing the futility of convincing her listless husband to help fight such an arduous battle, Sarah instead turns to newly arrived Gospel Hill schoolteacher Rosie (Stiles) for support. Later, as Rosie's budding romance with the son of Gospel Hill's notoriously bigoted sheriff thrusts her right into the middle of the town's long-running dispute, the developer's plan to pave over the past forces the locals to finally confront the ghosts that have haunted them for the past three decades. ~ Jason Buchanan, Rovi

RZA
as Lonnie
View All