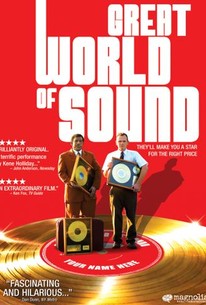 The Great World Of Sound is a charming and unassuming film, thanks to breakthrough performances from Pat Healy and Kene Holiday.

Martin answers an ad to train as a record producer, where he's excited by the prospect of signing undiscovered artists. The company, called Great World of Sound, partners shy, unassuming Martin with the gregarious Clarence and sends them on the road, visiting southern towns where the company has placed newspaper ads and turning motels into makeshift audition studios. Though an unlikely duo, they sign more acts than anyone else at the company. But when Martin takes a special interest in a young girl's "New National Anthem," putting up his own money and following her progress, he discovers that something's amiss with the enterprise. As things threaten to unravel, he's forced to weigh his nagging conscience against both his loyalty to Clarence and his own financial ruin. A playful, contemporary take on the classic American story of the confidence man, "Great World of Sound" evokes conflicted hucksters from Willy Loman and the Mayles Brothers' salesman to the seedy charmers of seventies Altman. With real-life audition footage weaved into the fictional narrative, Zobel's provocative debut explores the outer limits of our desire for celebrity, where big dreams beget bigger illusions, and fame always has its price.