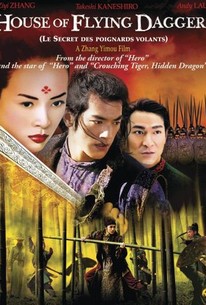 The visual splendor of the movie makes up for the weak story.

Chinese director Zhang Yimou fuses a martial arts action-drama with a tragic romance in this elegant period piece. In the year 859 A.D., as the Tang dynasty is beset by rebellion, Leo (Andy Lau) and Jin (Takeshi Kaneshiro) are a pair of lawmen who have been given the task of ferreting out the leaders of a revolutionary faction known as the Flying Daggers. Working on a tip that members of the group are working out of a brothel called the Peony Pavilion, Jin arrives there in disguise and is introduced to a beautiful blind dancer named Mei (Zhang Ziyi). After watching Mei's performance following several drinks, Jin drunkenly attempts to have his way with her, and Leo is forced to intervene. After gaining Mei's trust in a game of skill, Leo arrests her and informs her that she'll be tortured if she doesn't tell all she knows about the Flying Daggers. Jin responds by helping Mei break out of prison, but he has an ulterior motive -- by following her, Leo and Jin are certain she'll lead them to the Flying Daggers. However, as he helps the blind girl find her way back home, Jin finds himself falling in love with Mei, and isn't certain if he's willing to betray her again. ~ Mark Deming, Rovi