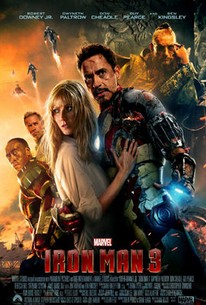 With the help of its charismatic lead, some impressive action sequences, and even a few surprises, Iron Man 3 is a witty, entertaining adventure and a strong addition to the Marvel canon.

Marvel's "Iron Man 3" pits brash-but-brilliant industrialist Tony Stark/Iron Man against an enemy whose reach knows no bounds. When Stark finds his personal world destroyed at his enemy's hands, he embarks on a harrowing quest to find those responsible. This journey, at every turn, will test his mettle. With his back against the wall, Stark is left to survive by his own devices, relying on his ingenuity and instincts to protect those closest to him. As he fights his way back, Stark discovers the answer to the question that has secretly haunted him: does the man make the suit or does the suit make the man? (c) Disney

Ben Kingsley
as The Mandarin

Pat Kiernan
as Himself

Josh Elliott
as Himself

Megan Henderson
as Herself

Thomas Roberts
as Himself

Bill Maher
as Himself

Adam Pally
as Gary the Cameraman

David A. Buglione
as Mandarin Guard

Sarah Farooqui
as Heather
View All

What Is the Most Underrated MCU Movie?
The 50 Highest-Grossing Movies of All Time: Your Top Box Office Earners Ever Worldwide
Marvel Movies Ranked Worst to Best by Tomatometer
View All