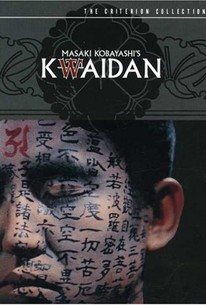 Exquisitely designed and fastidiously ornate, Masaki Kobayashi's ambitious anthology operates less as a frightening example of horror and more as a meditative tribute to Japanese folklore.

Kwaidan is an impressively mounted anthology horror film based on four stories by Lafcadio Hearn, a Greek-born writer who began his career in the United States at the age of 19 and moved permanently to Japan in 1890 at the age of 40, where he eventually became a subject of the empire and took on the name Koizumi Yakuno. Hearn became a conduit of Japanese culture to western audiences, publishing journalism and then fiction incorporating traditional Japanese themes and characters. "Black Hair," the first tale, concerns a samurai who cannot support his wife; he leaves her for a life of wealth and ease with a princess. Returning years later, he spends the night with his wife in their now-dilapidated house, only to awake to a horrifying discovery which drives him insane. In "The Woman of the Snow" (deleted from U.S. theatrical prints after the film's Los Angeles opening; it is on the DVD version), two woodcutters seek refuge during a snowstorm in what appears to be an abandoned hut. A snow witch appears and kills one of them but lets his partner free. Years later, the survivor meets and married a lovely young woman, only to learn her true identity. The most visually impressive tale is "Hoichi the Earless," in which a blind musician is asked by the ghost of a samurai to play for his late infant lord at a tomb. The monks who house the musician cover him with tattoos to prevent any harm coming to him, but they forget his ears. He returns from the engagement with his ears cut off; however, his misadventure propels him to fame. "In a Cup of Tea" concerns a samurai who is haunted by the vision of a man he sees reflected in his tea. Even after he drinks from the cup, he still sees the man while on guard duty. ~ Tom Wiener, Rovi

On DVD This Week: Jurassic World, Z for Zachariah, the Back to the Future Trilogy, and More
View All