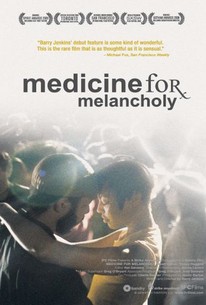 Blessed with clever dialogue and poignant observations of class and race, Medicine For Melancholy is a promising debut for director Barry Jenkins.

Fate (and alcohol) brings two people together in this independent romantic comedy-drama. Joanne (Tracey Heggins) and Micah (Wyatt Cenac) wake up together one morning after a drunken one-night stand, the result of attending a late-night party at the home of a mutual friend. It becomes clear they don't know each other very well and after sharing breakfast, Joanne isn't interested in getting to know Micah any better. However, when Micah discovers that Joanne has misplaced her wallet, he stops by her apartment to return it, and they end up spending the day together. Joanne and Micah don't appear to have much in common; she's well-to-do and lives in San Francisco's pricey Marina District, while he has a flat in the rough-and-tumble Tenderloin and works with a group of activists struggling to make housing affordable in the city by the bay. As the day wears on, Joanne and Micah become increasingly aware of a genuine mutual attraction, but they also realize just how different they really are. The first feature film from writer and director Barry Jenkins, Medicine for Melancholy received its premiere at the 2008 San Francisco International Film Festival. ~ Mark Deming, Rovi

News & Interviews for Medicine for Melancholy

Critic Reviews for Medicine for Melancholy

Audience Reviews for Medicine for Melancholy