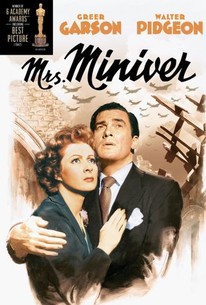 As Academy Award-winning films go, Mrs. Miniver has not weathered the years all that well. This prettified, idealized view of the upper-class British home front during World War II sometimes seems over-calculated and contrived when seen today. In particular, Greer Garson's Oscar-winning performance in the title role often comes off as artificial, especially when she nobly tends her rose garden while her stalwart husband (Walter Pidgeon) participates in the evacuation at Dunkirk. However, even if the film has lost a good portion of its ability to move and inspire audiences, it is easy to see why it was so popular in 1942-and why Winston Churchill was moved to comment that its propaganda value was worth a dozen battleships. Everyone in the audience-even English audiences, closer to the events depicted in the film than American filmgoers-liked to believe that he or she was capable of behaving with as much grace under pressure as the Miniver family. The film's setpieces-the Minivers huddling in their bomb shelter during a Luftwaffe attack, Mrs. Miniver confronting a downed Nazi paratrooper in her kitchen, an annual flower show being staged despite the exigencies of bombing raids, cleric Henry Wilcoxon's climactic call to arms from the pulpit of his ruined church-are masterfully staged and acted, allowing one to ever so briefly forget that this is, after all, slick propagandizing. In addition to Best Picture and Best Actress, Mrs. Miniver garnered Oscars for best supporting actress (Teresa Wright), best director (William Wyler), best script (Arthur Wimperis, George Froschel, James Hilton, Claudine West), best cinematography (Joseph Ruttenberg) and best producer (Sidney Franklin). Sidebar: Richard Ney, who plays Greer Garson's son, later married the actress-and still later became a successful Wall Street financier. Mrs. Miniver was followed by a 1951 sequel, The Miniver Story, but without the wartime setting the bloom was off the rose. ~ Hal Erickson, Rovi

Dame May Whitty
as Lady Beldon

Brenda Forbes
as Gladys, the Housemaid

Aubrey Mather
as George, the Innkeeper

John Abbott
as Fred, the Porter

Connie Leon
as Simpson, The Maid

Florence Wix
as Woman with Dog

David Dunbar
as Man in Store

Sidney D'Albrook
as Man in Store

Walter Byron
as Man in Tavern

Ted Billings
as Man in Tavern

Dan Maxwell
as Man in Tavern

Frank Atkinson
as Man in Tavern

Henry King
as Man in Tavern

Gil Perkins
as Man in Tavern

John Power
as Man in Tavern

Colin Kenny
as Policeman
View All