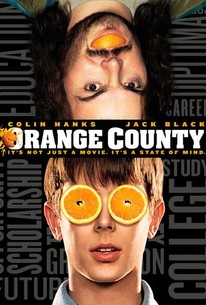 Smarter than the average teen movie, but a little on the unmemorable side.

Some cast and crew from NBC's highly acclaimed, little-seen series Freaks and Geeks reunite for this teen comedy that also marks the first starring role for Tom Hanks' son, Colin. The younger Hanks plays Shaun Brumder, a high schooler eager to propel himself out of the land of surf bums and ranch homes to which the film's title refers. He's had his sights set on Stanford ever since he read the works of professor Marcus Skinner (Kevin Kline), and his transcript is stellar enough to gain him admission. Shaun is understandably furious, then, when he receives a rejection letter in the mail; after some detective work on his part, he realizes that his flaky counselor (Lily Tomlin) mistakenly sent the university the wrong papers. It's up to him to get to Stanford within 24 hours to set the record straight -- literally -- and he enlists the help of his slacker brother Lance (Jack Black) to do so. Orange County co-stars Catharine O'Hara and John Lithgow as Shaun and Lance's slightly unhinged parents; the film was directed by Jake Kasdan and written by Mike White, both of whom contributed to several episodes of Freaks and Geeks. ~ Michael Hastings, Rovi