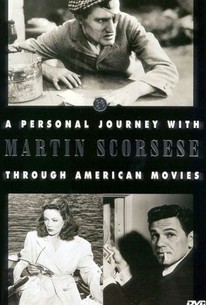 A Personal Journey with Martin Scorsese Through American Movies

In 1994, the British Film Institute commissioned a set of films to mark the centenary of the movies. They would trace the history of several national cinemas, and the BFI's choice for interpreting the history of American film fell to director Martin Scorsese, a longtime champion of film history and preservation. Scorsese's approach to his subject is director-centered, as he examines the tension inherent in the struggle of an artist wishing to make a personal statement against the collaborative nature of films and the commercial pressures of the Hollywood moviemaking factory. Segments of this series are devoted to the director as storyteller (examining narrative devices in the Western, gangster film, and musical), illusionist (technical tricks), smuggler (imbedding personal messages), and iconoclast (bucking the system to make films his own way). The series is replete with telling clips, not just snippets or shots, but entire scenes which illustrate Scorsese and co-director Michael Henry Wilson's points. Other filmmakers, including John Ford, Francis Ford Coppola, Billy Wilder, and Orson Welles, are seen in archival footage or interviews created for the series, offering their own take on the art of filmmaking. Scorsese doesn't discriminate between filmmakers with glossy reputations and those who always worked on the fringe of public awareness. If anything, he goes out of his way to champion mavericks like Samuel Fuller whose "visceral cinema" never enjoyed box-office success or awards. Personal Journey was first shown on British TV, released in limited fashion to theaters in the United States, and shown here on TV as well. A tie-in book was published in 1997 by Miramax Books; it contains the entire script for the series, excellent black-and-white stills, and dialogue from some of the clips.

A Personal Journey with Martin Scorsese Through American Movies Quotes