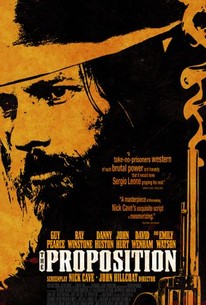 Brutal, unflinching, and violent, but thought-provoking and with excellent performances, this Australian western is the one of the best examples of the genre to come along in recent times.

An outlaw is goaded into taking on justice at its most brutal in this hard-edged Western set in rural Australia in the 1880s. Charlie Burns (Guy Pearce) is a criminal living in the outback. He and his two brothers, Arthur (Danny Huston) and Mikey (Richard Wilson), are on the run from the law for rape and murder. Arthur is a violent and dangerous sociopath with a much longer rap sheet than his siblings and a reputation for hiding out in villages so lawless the police are afraid to visit them, while Mikey is a much younger and more impressionable chap.The authorities capture Charlie and Mikey after a bloody shootout, and the brothers are handed over to Capt. Stanley (Ray Winstone), a British lawman sent to Australia to help bring order to the colonies. Stanley proposes a deal to Charlie, explaining that it's Arthur he really wants, and that he's willing to spare the childlike and terrified Mikey if Charlie can find Arthur and murder him. Charlie, realizing that this is his only hope to save his simpleton younger brother (who is scheduled to be hanged on Christmas Day), agrees and sets out to find and execute his other brother, who he believes has gone too far into the world of crime. As Charlie scours the backwaters of Australia, he encounters Jellon Lamb (John Hurt), an educated yet thoroughly menacing bounty hunter. In time, Charlie finds his brother, but isn't certain if he can carry out his mission. Meanwhile, Stanley struggles to bring a European sense of civility to the rough and tumble land he now calls home, while his wife Martha (Emily Watson) becomes the focus of the lustful appetites of the men in town. The Proposition was written by rock star and novelist Nick Cave; he previously collaborated with director John Hillcoat on the film Ghosts... of the Civil Dead. ~ Mark Deming, Rovi

News & Interviews for The Proposition

Critic Reviews for The Proposition

Audience Reviews for The Proposition