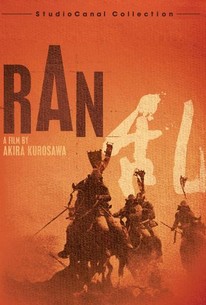 Akira Kurosawa's sprawling, epic take on King Lear should be required viewing for fans of westerns, war movies, or period films in general.

Ran is Japanese filmmaker Akira Kurosawa's reinterpretation of William Shakespeare's King Lear. The Lear counterpart is an elderly 16th-century warlord (Tatsuya Nakadai), who announces that he's about to divide his kingdom equally among his three sons. In his dotage, he falls prey to the false flattery of his treacherous sons (Akira Terao and Jinpachi Nezu), while banishing his youngest son (Daisuke Ryu), the only member of the family who loves him enough to tell him the unvarnished truth. Thanks to his foolish pride, his domain collapses under its own weight as the sons battle each other over total control. Kurosawa's first film in five years, Ran had been in the planning stages for twice that long; Kurosawa had storyboarded the project with a series of vivid color paintings that have since been published in book form in England. The battle scenes are staged with such brutal vigor that it's hard to imagine that the director was 75 years old at the time. This 160-minute historical epic won several international awards, but it was not a hit in Japan, and it would be five more years before Kurosawa would be able to finance another picture. ~ Hal Erickson, Rovi

Takeshi Katô
as Hatakeyama
View All