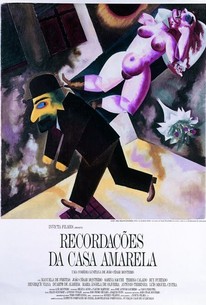 This quirky Portuguese comedy won a silver lion at the 1989 Venice Film Festival. The story concerns the irrepressible Joao de Deus (played by the director, Joao Cesar Monteiro), an ill-kempt, lusty and none-too-honest resident of Violeta's boarding house, which happens to have yellow walls. Joao, who has no visible means of support, is in his fifties, and is not above cadging money from his 70 year old mother, who still works as a cleaning lady. He has a wistful sort of lust for the young ladies in the boarding house, and gets a kind of thrill when he is permitted to take a bath in their used water. He strikes up a friendship with a slightly stupid girl who is a mite promiscuous, and even has a brief sexual encounter with her himself. Many slightly "off" encounters occur during the remainder of the film, but despite Joao's potentially defeating setback near the end, it appears that it won't be long before he's back in action. ~ Clarke Fountain, Rovi

There are no featured audience reviews for Recordações da Casa Amarela (Recollections of the Yellow House) at this time.