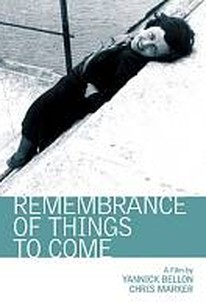 REMEMBRANCE OF THINGS TO COME, the latest "cine-essay" of Chris Marker, is dense and demanding, a splendid reminder that his nimble, capacious mind has lost none of its agility, poetry, and power. Ostensibly a portrait of photographer Denise Bellon, focusing on the two decades between 1935 and 1955, the film leaps and backtracks, Marker-style, from subject to subject, from a family portrait of Bellon and her two daughters, Loleh and Yannick (the latter co-authored the film), to a wide-ranging history of surrealism, of the city of Paris, of French cinema and the birth of the cin (C)mathque, of Europe, the National Front, the Second World War and Spanish Civil War, and postwar politics and culture.Full of Marker jokes (a great one about artists and cats), word play (Citroen/citron), filmic homages (Musidora makes a memorable appearance), peculiar art history, a consideration of the 1952 Olympics, and astounding segues from French colonialism in Africa to women in the Maghreb, to a Jewish wedding and gypsy culture in Europe, to Mein Kampf and the Nazi death camps (Birkenau, Auschwitz), the film opens with Dali and ends with Mompou, traversing in its short time a world of thought, feeling, and history.A small masterpiece of montage, REMEMBRANCE OF THINGS TO COME is from moment to moment reminiscent of Resnais, Ivens, even Kubrick, but in its deployment of still photographs (as in La Jet (C)e), its theme of history and memory, its subject-skipping montage and rapid shuttle of wit and philosophy, REMEMBRANCE is pure, marvelous Marker. -- © First Run/Icarus Films

There are no featured audience reviews for Le Souvenir d'un avenir (Remembrance of Things to Come) at this time.