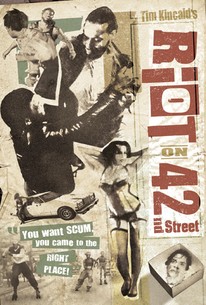 Bad Girls Dormitory director Tim Kinkaid takes the helm for this sleazy tale of a grindhouse theater who takes on the entire New York underworld after his employees are massacred by mafia thugs. All Glen Barnes (John Patrick Hayden) wanted was to run a legitimate theater specializing in the most disreputable films around. Unfortunately for Jim, it just doesn't work that way around the Deuce. When Glen refuses to fork over a cut of the action to the local mafia, the stage is set for a bloodbath. What the mafia doesn't realize is that Glen is a man with a particularly violent past, and he's not afraid to resort to his old ways in order to settle the score. But Glen's ex-girlfriend (Michelle Owens) is a cop who rues the thought of seeing him sent up the river for life, and as she tries her hardest to steer him clear of violence, her scheming partner (Jeff Fahey) works overtime to prevent any romantic flames from being rekindled.

There are no critic reviews yet for Riot on 42nd Street. Keep checking Rotten Tomatoes for updates!

There are no featured audience reviews for Riot on 42nd Street at this time.