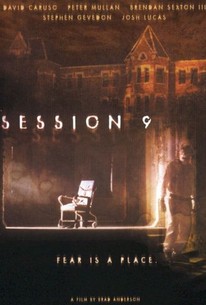 Relying more on atmosphere than gore, Session 9 is effectively creepy.

Writer/director Brad Anderson, known for whimsical romantic comedies like Next Stop, Wonderland, was inspired by the astonishing, creepy visage of an abandoned mental hospital in Danvers, MA, to make the intense psychological horror film Session 9. The film stars the redoubtable Scottish actor Peter Mullan (from Ken Loach's My Name Is Joe) as Gordon Fleming, a new father struggling to keep his asbestos removal company afloat. Desperate to bring in some money, the normally deliberate and careful Gordon gets the contract by promising that his company can clear out the creepy deserted building in a week's time. Assisted by his right-hand man, Phil (David Caruso), Gordon hires a crew and, pressed by the nearly impossible deadline, gets the hazardous work underway. But each man on the crew harbors a dangerous secret, and it's only a short time before the haunted atmosphere of the asylum -- where cruel and primitive means were used to control unstable patients -- begins to work its dark spell on them. Session 9 was one of the first feature films shot using Sony's 24P HD video, which shoots at 24 frames per second, like film, as opposed to the 30 frames per second of conventional video. The filmmakers used the same camera that George Lucas would later use to film Star Wars: Episode II. Using this technology, Anderson and director of photography Uta Briesewitz were able to produce the uniquely effective, deep-focus images in Session 9 using mostly natural light.

Sheila Stasack
as Wendy
View All