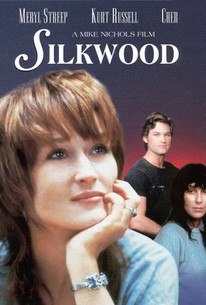 Silkwood seethes with real-life rage -- but backs it up with compelling characters and trenchant observations.

Based on a true story, Silkwood begins and ends with Karen Silkwood (Meryl Streep) driving along a lonely road in 1974, heading to a meeting with a New York Times reporter to deliver evidence of negligence at the Kerr-McGee Plant in Cimarron, Oklahoma. The balance of the film flashes back to Karen's ribald private life with her lover (Kurt Russell) and her loose-living friends (Cher and Diana Scarwid). This is in contrast to her humdrum job at Kerr-McGee--or it least it was humdrum until Karen and several other employees become contaminated by radiation. The higher-ups want to sweep this incident under the rug, but Karen thinks that something's fishy, and informs the union of that fact. X-rays of the faulty fuel rods and written proof of the inadequate safety measures that caused Karen's illness are tampered with, forcing Karen to conduct her own private investigation. As she gathers evidence, Karen becomes a pariah to her boyfriend because of her obsession. She finally organizes the evidence into a briefcase, and heads off to her meeting with the Times reporter. She never makes it; the "official" report on her fatal auto accident is that Ms. Silkwood had been drinking and was under the influence of tranquilizers. Kerr-McGee was eventually forced to pay the Silkwood family an enormous settlement because of her contamination, but the full facts behind her convenient accident have never been revealed (though the filmmakers clearly indictate whom they hold responsible). Director Mike Nichols and screenwriters Nora Ephron and Alice Arlen surround this true story with a lively, improvisational atmosphere that gets the best out of Streep, Russell, and Cher, while providing perhaps the fullest on-screen realization of Nichols' theater-based techniques of realistic, character-centered, dialogue-driven filmmaking, as well as one of the first movie screenplays from future director Ephron.

Bill Cobbs
as Man in Lunchroom

Betty Harper
as May Bissell

Dan Lindsey
as Man at Fence

John Martin
as Man with Flashlight

Will Patton
as Joe

Don Slaton
as Man in Moonsuit