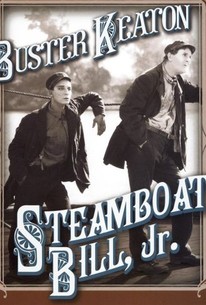 Not the best of Buster Keaton's silents, Steamboat Bill, Jr. nonetheless contains some of Keaton's best and most spectacular sight gags. Keaton plays Willie Canfield, the namby-pamby son of rough-and-tumble steamboat captain "Steamboat Bill" Canfield (Ernest Torrence). When he's not trying to make a man out of his boy, the captain is carrying on a feud with Tom Carter (Tom McGuire), the wealthy owner of a fancy new ferryboat. Carter has a pretty daughter, Mary King (Marion Byron), with whom Willie falls in love. The two younger folks try to patch up the feud, but this seems impossible once the captain is jailed for punching out Carter. Willie tries ineptly to bust his dad out of jail, only to wind up in the hospital while trying to escape the law. As Willie lies unconscious in bed, a huge cyclone hits town, knocking down tall buildings like kindling. Upon awakening, he does his best to remain standing as the winds buffet him about. He takes refuge in a tree, which is promptly uprooted and blown toward the waterfront. Here is where Willie proves his manhood -- and ends the feud between Steamboat Bill and Carter -- by rescuing practically everyone in the cast from a watery grave. Steamboat Bill, Jr. would be memorable if only for one eye-popping (and dangerously real) sight gag: as the cyclone rages, the facade of a three-story building collapses upon Keaton -- who is saved only because the upstairs window has been left open!

Joe Keaton
as Barber
View All