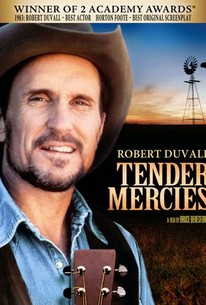 Anchored by a deftly understated performance from Robert Duvall, Tender Mercies is a quiet character study that leaves a lasting emotional impact.

Mac Sledge (Robert Duvall), a once-famous country western singer, wakes up broke, alone and hung over in a tiny Texas motel run by widowed Rosa Lee (Tess Harper). Having nowhere else to go, Sledge takes a job at the motel, and through the kindness and faith of Rosa he changes his self-destructive ways. He marries Rosa (after he's baptized at her urging) and becomes a father/pal to her son (Allan Hubbard). Given an opportunity to make a comeback, Sledge considers leaving his new family behind, but after a reunion with his own unhappy daughter (Ellen Barkin), he vows never again to ruin anyone else's life. A simple story simply told, Tender Mercies is a warm, persuasive tale of redemption, with Robert Duvall giving one of his finest performances. Also appearing is Betty Buckley as Duvall's ex-wife, a Dolly Parton-type country star, and Wilford Brimley as Duvall's former manager. ~ Hal Erickson, Rovi

Jerry Biggs
as Man at Bar

Tony Frank
as Man at Motel

Helena Humann
as Woman with Groceries

Ray LePere
as Man in Bar

Terry Schoolcraft
as Ada
View All