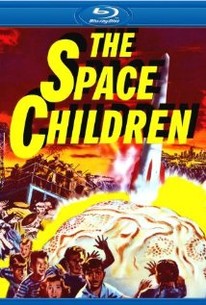 Dave Brewster (Adam Williams) arrives to take his new job as an electronics technician at a top-secret Air Force base in California. With him are his wife Anne (Peggy Webber) and their two children, Bud (Mikel Ray) and Ken (Johnny Crawford), who are all apprehensive about this sudden transplant, as well as the spartan existence that all of the families live under. No sooner do they arrive, however, then Bud and Ken see a strange light in the sky pointing to the beach, and soon after that seem to be receiving increasingly powerful -- and detailed -- telepathic communications from an unseen source. The boys are drawn, along with the children from the other families, to a lonely cave near the beach, where an alien presence, in the form of a huge (and ever-growing) brain, has hidden itself. At first, it uses the children to try and persuade the more reasonable of the parents that their project -- a missile called The Thunderer, which will place a hydrogen bomb in orbit, capable of being used on any target in the event the United States is threatened -- is too dangerous to complete. But the parents aren't prepared to listen, either because they don't understand the danger, or because they genuinely believe in the conduct of the Cold War, as in the case of Hank Johnson (Jackie Coogan); or because they're too angry and belligerent, like Joe Gamble (Russell Johnson), who is at a dead-end in his job and has taken to alcoholism and abusing his wife (Jean Engstrom) and stepson (Johnny Washbrook). As the launch approaches and the children's entreaties are ignored, the alien takes more direct action with their help, and they soon find a potential ally in in Dr. Wahrman (Raymond Bailey), the inventor of The Thunderer, who is also the only man on the project smart enough to realize that he may not have all the answers. But the military head of the project (Richard Shannon) is stil prepared to launch The Thunderer, regardless of its inventor's doubts. ~ Bruce Eder, Rovi

Critic Reviews for The Space Children

Audience Reviews for The Space Children

There are no featured audience reviews for The Space Children at this time.