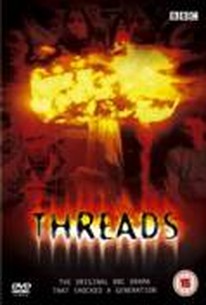 An urgent warning against nuclear conflict, Threads is a chilling hypothetical that achieves visceral horror with its matter-of-fact presentation of an apocalypse.

Originally produced by the BBC, Threads is a shattering speculative tale the onset of World War III, and the horrors of the post-apocalyptic society that struggles for survival. The film takes place in the ruins of Sheffield, a British working class town. Despite the fact that the world seems to be falling apart all around them, a young couple (Karen Meagher, Reece Meagher) intend to go ahead with their upcoming wedding. As the date draws near, however, simmering international tensions soon erupt into global thermonuclear war. In the devestation that follows, the apocalyptic erosion of society sends mankind hurtling back hundreds of years into an age where famine, strife, pestilence, and death wash over the land like an unrelenting flood of venomous bile. The central theme of the film seems to be that the adage "Life Goes On" just isn't good enough in a world doomed to a slow death by radiation. Without resorting to shock or sensationalism, this one makes The Day After and Testament look like kids' stuff. Though not picked up by any of the major American networks, Threads was widely distributed in the US through the auspices of cable mogul Ted Turner. ~ Hal Erickson, Rovi